The below is taken from The Whisky Distilleries of the United Kingdom by Alfred Barnard first published in 1887. You can find the distillery profile at our Caledonian overview

OUR tour in the north, which had been such a source of pleasure to us, was now virtually at an end, and we left Stirling with some feeling of regret. The journey to Edinburgh was short when compared with the distances we had traversed. Recently our “spiritual wanderings” had been among the heather, valley, and mountain; we were now again to visit city distilleries of such magnitude that a dozen of those lately described could be crowded into one of these establishments. It was a lovely day, and as we approached the noble and ancient metropolis of Scotland, the hills in the back-ground revealed to us a combination of glories now wreathed in green-clad garments - anon rugged and broken, some times lifting their heads to the clouds with a sombre reverence, at others shaded by still higher crags in a mass of ever-changing witchery - and later on as we drove along Princes Street, and noted the scenic groupings of monuments, the stately Castle, and noble surroundings of this city of tragedy and romance, we were thrilled with wonder and delight, and called to mind some lines we had seen:

On the morning after our arrival we paid a visit to the Caledonian Distillery. It is situated at the west end of the city, and in a neighbourhood sacred to the memory of Sir Walter Scott, who lived for many years on the estate of Dalry Manor, six hundred yards from the Distillery. Sir Walter Scott was born in Edinburgh, where he received his instruction and learning, but the belief part of his education was gathered here and there through all Scotland - in huts and halls, from ancient battle fields, Highland chieftains, Border reivers, and the rudest ballads - no mind ever fed on more varied elements or turned them to better use. Dalry Road, where he last resided with his daughter, is in close proximity to the Distillery, and the whole locality is full of interesting reminiscences of this great man.

From the main road we diverged down a turning in close proximity to the Haymarket Station, at the end of which the whole pile of buildings connected with the works stretched out before us. Arriving at the gateway, after producing our credentials, we were admitted within.

The Caledonian Distillery covers 7¼ acres of ground, and was built in the year 1855 by Messrs. Menzies & Co., who transferred it to the Distiller’ Company, Limited, in the year 1884. It is the second largest Grain Distillery in the United Kingdom, and in all respects it may be called the model Distillery of Europe, as it contains every improvement of machinery and new patent known in distilling, and fully justifies this appellation. It has also the advantage of two lines of railway right through the works (the Caledonian and the North British). The grain is delivered in bulk-covered waggons with sluice flap bottoms (the only ones of the kind we have seen in Scotland), each holding 50 quarters of grain. Arriving at the grain department the attendant unbolts the trap, and the grain falls into a sluice in the middle of the six-foot way into a continuous screw which almost in an instant sends it to the elevators (50 feet distant) carrying it up to the top floors, and delivering it by the screws, to the various grain departments - thus almost doing away with manual labour. These screws are wonderful contrivances, and consist of an endless screw the shape of a corkscrew with steel flanges, which is enclosed in a box, or trough, a foot square. The end of the screw is turned by steam power, and as the grain descends into the machinery it is screwed away any distance, and stopped in its onward progress by a very simple contrivance, at any floor or department required.

There are fourteen Grain Stores holding together over 15,000 quarters of grain, and we noticed that some of the barns were so full that the doors had burst open with the weight. The divisional departments of the Grain Stores where the tackle goes through, and the fans for steam drying are concerned, are six in number-enormous buildings covering three acres of ground. One of them, a new lofty Gothic structure, is a notable object from the railway as you approach the Haymarket Station. Most of these Warehouses are two and three-deckers, having hydraulic lifts. No. 1 Warehouse contained 8,000 casks of Whisky, and No. 2 about 10,000.

At the extreme end of the works is the Malting Department, the Main Barley Loft being connected with the Grain Department by an outside gallery. It is a lofty building 172 feet long by 76 feet broad, and contains 3,000 quarters of barley, which is delivered by the screws into the two Steeps, 34 feet square and 3½ feet deep, each holding 100 quarters. The grain falls from the steeps above into the couch below, and is distributed by manual labour over the seven Malt Barns, mostly 172 feet long by 76 feet broad. There are two Malt Deposits, each holding 3,000 quarters. The two Malt Kilns are 110 feet long by 52 feet wide, and are capable of drying 900 quarters of malt weekly. Our guide then conducted us to the Still House, a fine building containing three Pot Stills. 16,000, 9,000, and 5,000 gallons content respectively, four Feints Receivers, also a large Carter’s Rectifying Still capable of holding 4,000 gallons, from which the spirit runs through a patent safe at the rate of 200 gallons per hour.

The steam power is on an extensive scale in this establishment, there being seven powerful engines from 10 to 150 horse power, and eleven boilers each 30 feet long, and 71 feet in diameter.

The Cooperage is a large department, and the ground in front reminded us of the Burton Breweries, for there are many thousands of casks waiting their turns to be filled. There is a smiths’, joiners’ and coppersmiths’ shop, together with buildings for general stores, also saw-mills and hydraulic pumps.

The water used comes from the Union Canal, and is of fine quality. The make is Grain Whisky, and the annual output of the Distillery is a little over 2,000,000 gallons.

There are 220 persons employed in the Establishment, and eleven Excise gentlemen on the premises, the chief being Mr. Halley.

The works are close to the Haymarket Station, and would amply repay the tourist a visit.

Images of The Caledonian 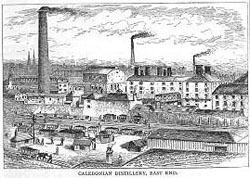